Why take a team of boxers to Syria?

The Imam Husain Islamic Centre in Earlwood invited me to speak to their community about my up-coming mission to Syria on February 28th, 2015.

It was a great night. We screened our ‘Boxers for Peace’ video, after which I offered the brief remarks reprinted below. One thing I hadn’t expected was that at one point my audience broke into spontaneous applause!

I have spoken quite a few times at the Imam Husain Centre and I have listened to a good many other people speak there too. This was the only time I can remember ever seeing a spontaneous outbreak of applause! Guess what it was that generated the applause! 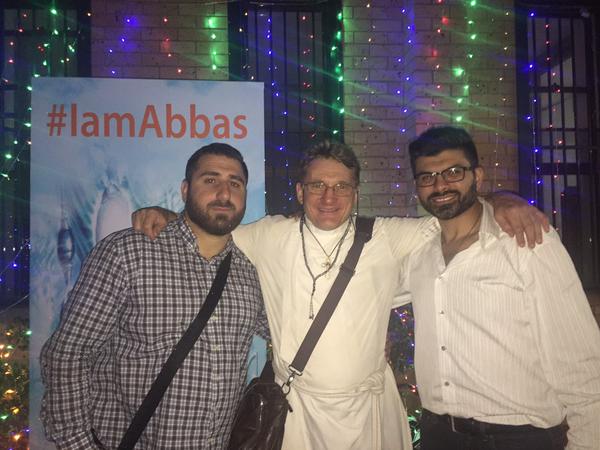 a great night at the Imam Husain Centre

In the name of God, merciful and compassionate, and in the name of the Father, son and Holy Spirit, I wish you peace and thank you for once again gracing me with this invitation to share with you.

I am heading back to Syria in April. This will be my third trip and I am excited to go as I think we can really make a difference there, though I can understand if any number of people might ask how!

We are facing a lot of problem in the world at the moment.

Of course we might have hoped that this wave of persecution might draw Christians and Shia Muslims together. It seems though that in this country, as in America and Europe, the gulf between Christians and Muslims of all kinds is deepening, driven largely by ignorance fuelled by a compliant media.

I must stop at this point and mention one statement I read today which I thought tragically exemplified this ignorance on the part of the Christian community. It was a statement made by Franklin Graham (son of the great American Christian evangelist, Billy Graham) where he said “Imagine the outcry’ if Christians beheaded 21 Muslims”. This was in response to ‘Islamic State’s’ beheading of 21 Egyptian Coptic Christians – tragic indeed, but Graham’s question was, in my view, absurd!

I wrote on the blog that reported Graham’s statement, the following:

“What has Mr Graham been smoking? According to Professor Francis Boyle of Illinois University, Christians have killed 3.3 million Iraqis since the first Western invasion of 2001. Add to that all the deaths resulting from the bombs dropped on the seven majority-Muslim countries that Mr Obama has bombed since he came into office. Add to that the death of Muslim people killed by drone attacks in Pakistan, Yemen, Afghanistan, etc. We could go on. Of course we might say that the persons who do these killing aren’t Christians, which is exactly what Muslim people say about Islamic State.”

In short, we are in a bad way, so what on earth, you might ask, is Father Dave doing, trying to address this situation by taking a team of boxers into Syria?

In part, it’s because I’m a very limited human being. I can preach and I can punch and I’m not good at much else.

Moreover though, the problems I’ve outline are political, tied up with issues of money and power, and I’m not a politician and don’t have the skills or the influence to do anything significant at that level.

The issues are also religious, in a sense, but the religious issues are complicated (as the stupid statement by Franklin Graham illustrates) and trying to address the problem purely from a religious perspective is also complicated.

Addressing these issues though through sport is straightforward, and very Australian, and I do believe that using the avenues of sport we can address the human dimension of these problems quite directly.

With regards to the Syria peace mission our goal is threefold:

Boxing did a lot to bring blacks and whites together in Apartheid South Africa. Boxing accomplished a lot in Northern Ireland, to help build bridges there across religious and political divides. I am hoping that we can again use boxing to bring people together – Syrians and Australians, Christians and Muslims, young and old.

The problems are complicated, but at a grass-roots level the problem is simple human alienation based in ignorance and fear. Boxing can help us bridge that gap.

Please pray for the ‘Boxers for Peace’2015 Syria mission!