I had some excellent men join me in the rign on Saturday night, June 26. My first opponent – Fonda – had obviously had a few fights. He knew what he was doing, was fit, and slightly larger than me. His the only fight I’ve included in the video, though two more guys immediately followed him, and they were both hard work too. I then made my usual thank-you’s, had a photo taken with my three opponents, and then sat down as the crowd returned to their cabins.

The shock came about five minute later when another group of around a dozen, who were camping on our site, showed up late. I apologised to them for not gerring to their camping area and letting them know that we were about to start. Then another guy showed up who had earlier told me that he was keen to fight me. Between the whole group, the groans of disappointment seemed so palpable that I put my wraps and glove back on and fought three more opponents from the second group! I slept well that night.

As to the Bible readings for the following Sunday, there was plenty of passion there too. The reading from the Hebrew Bible focused on King David’s lament over the death of Saul, and more especially over Saul’s son, Jonathon. David says of Jonathon, “Your love for me was wonderful, more wonderful than that of women.” (2 Samuel 1:26b). However we understand that, it was a deeply personal statement, and yet David included this in a song of lament that the entire country would sing!

Paul is passionate as ever in his plea to the church in Corinth to ‘finish what they had started’ (2 Corinthians 8:11) though it might not be obvious to the casual reader what great work he was referring to. Paul is talking about the aid collection being taken up amongst the non-Jewish churches to support needy sisters and brothers in Jerusalem. It was the first-ever global Christian welfare project! Those who downplay the importance of sharing with the poor need to take good account of these words of St Paul, and recognise too that Paul’s final arrest only happened because he risked his freedom to ensure that this aid collection reached its proper recipients.

The Gospel reading has Jesus engaging with three different people who are very different from eachother. The first is Jairus, a synagogue leader and a powerful community figure, the second is his 10-year-old daughter who is gravely ill. The powerful father is helpless in the face of the illness, and so he appeals to Jesus. Coming into this story from left-of-field is an unnamed woman who intercepts Jesus en route to the home of the father and daughter. She is a shadowy figure, only known to us through her painful and embarrassing condition, such that she had been bleeding for twelve years.

Jesus displays both power and tenderness towards each of the characters in this story. We also see something in this story about the power of touch. The woman touches Jesus and is healed. Jesus touches the little girl and she is healed. Cannot the healing power of Jesus still be communicated to us through human touch?

We had a great pair of boxers to take me on in the Binacrombi Bush Bash on the Saturday night (Karim and Mohammad) and a wonderful collection of Bible readings at our Sunday Eucharist. The highlights of both are in the video below.

As to the boxing, both of my opponents were skillful pugilists but they lacked the fitness to really push me. A long day of bike-riding and an over-fondness for the sisha pipe had them performing as a tag team between rounds.

As to the Eucharist, our reading from the Hebrew Bible (1 Samuel 8:4-20, 11:14-15) focused on that pivotal point in Israelite history where the community made the transition from a being a loose tribal confederation to a monarchy.

We might be tempted to see this only as an issue of political expediency but the prophet Samuel saw it as a faith issue, believing that the move towards monarchy displayed a failure of trust in God.

Paul’s words to the church in Corinth (2 Corinthians 4:13-5:1) are filled with emotion as, once again, he comes to terms with his personal pain in the context of the great future that God has in store for us and for all creation.

The Gospel reading from Mark 3:20-35 is one of those very sobering passages where we sense how isolated Jesus was from the structures we might have expected would support Him.

His religious institution, which you might have thought would be a force for life and healing, was turning on Him to destroy Him. You might then expect that His family would step in and stand by Him, but they didn’t. Instead, they tried to shut him up and shut him down – perhaps more for their sakes than for His.

“Who are my mother and my brothers?”, Jesus asks. They were not the people anybody had expected.

The Iranian Council for Defending the Truth (ICDT) asked me to write something about the Pope’s visit to Iraq. As I explained to the editor, I am not Catholic. Even so, when I see Pope Francis act like this, a large part of me wishes that I was.

If you can’t see the article below, click here.

Father Dave responds to statement from the spokesperson for the Sydney Anglican Diocese on February 26th, 2021

The following statement was released by the Anglican Diocese of Sydney in response to the segment aired by A Current Affair on February 24th, 2021, and can be found on the Current Affair website.

Our policy around marriage breakdown does not involve blame or sacking. But in the close-knit community of a church congregation, the breakdown of the rector’s marriage causes wider relational difficulties and so usually leads to the minister changing roles, in the interests of the congregation. After the breakdown of Father Dave’s second marriage, several factors meant that in this case, a continuing role was not available in his parish. A minister is financially supported by the members of the congregation.  When a minister loses the confidence of his congregation, they are no longer willing to support him.  The parish generously provided Father Dave with a stipend and free housing for twelve months to help him find a new job. The diocese also agreed to continue his licence for ministry so he could take up a new role. Father Dave is now fund raising for the next phase of his ministry, and we wish him well in this.

I believe this is a disingenuous statement that contains multiple falsehoods. I will address the three key points individually:

This is false. The policy is (and always has been) that clergy will normally lose their license if their marriage breaks down. This was reaffirmed to my by Bishop Stead when I first notified him of the impending separation and he is quoted as reaffirming it in the Guardian article of November 14, 2020:

“The bishop of the southern region, Michael Stead, did not dispute that Smith’s 30-year career as rector of Holy Trinity in Dulwich Hill was over because he and his wife had split…

Stead said Smith’s position had become untenable on biblical grounds, citing 1 Timothy 3:5: “If anyone does not know how to manage his own family, how can he take care of God’s church?””

I was told by the same bishop that if I could even show that my wife and I were in counselling by the end of 2018, my license would be extended. To say that my termination was not due to the marriage breakdown is a simple falsehood.

I would contest that I had not lost the confidence of my congregation. Indeed, a petition was presented to Bishop Stead, signed by at least half the active members of the congregation, asking that I might retain my position. It was made clear to the petitioners then that my future was not theirs to decide.

I certainly had at least one opponent in the congregation, and had had for a number of years. That person’s influence grew considerably after my separation, and particularly after my position was terminated. Even so, I have no doubt that those who opposed me would have settled down had I had the support of the bishop to continue.

After my forced resignation on April 19,2020, I was not told to look for a new job but was told that I would take up the position of Assistant Minister to the new incumbent. I soon discovered though that I was not being permitted to continue in ministry in the parish in any capacity, though I did try to continue to minister to the broader community.

I received the part-time stipend and accommodation that came with the position that I had, even if it was only on paper, and that stipend was later supplemented with long service leave payments due to me.

My employment ceased entirely on December 31st, 2020 (not a year, but eight months after my resignation) and no payments were made after that date. The extended housing was in lieu of a $10,000 severance payment that the Parish Council had agreed to in February 2020. In other words, the housing was not free and the stipend was never generous.

This review appeared in Anglican Focus (a publication of the Anglican Church of Southern Queensland) on February 19, 2021.

Father Dave Smith on how Christians and Muslims can be friends – ABC Religion and Ethics report, December16, 2020

December 16th, 2020 – thank you, Andrew West, for inviting me to share something about my book on ABC’s Religion and Ethics report.

Church punches below the belt then knocks out its fighting priest – Sydney Morning Herald, December 5th, 2020

Elizabeth Farrelly’s column was a sobering reminder that the church’s treatment of people who undergo marriage breakdown is a much bigger issue than just my case. Click here or the image to read the article. Click here to read letters that came in response to the article. 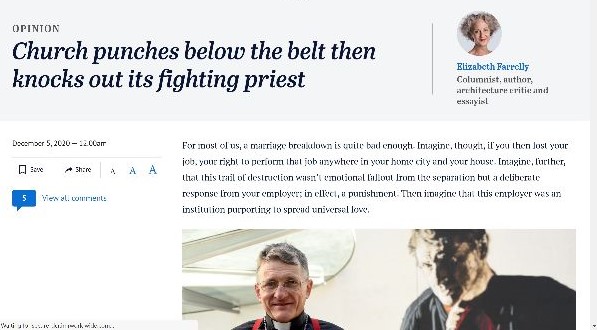