A small team of us flew to London after leaving Syria on April 15, 2014. The original reason for going was to hand-deliver something to the Archbishop of Canterbury – an invitation from the Grand Mufti of Syria to visit Damascus. In the end though we arrived without invitation or appointment!

Even so, we certainly made the best of it, ending our five days in London with a visit to Julian Assange and beginning it with an interview with George Galloway on ‘Sputnik‘. 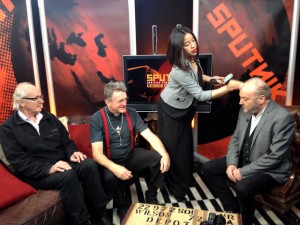 John, me, Gayatri & George on ‘Sputnik’

I am a big fan of George Galloway. I met him for the first time in Sydney in 2013 where I interviewed him (see here). This time it was his turn to interview me. 🙂