Dreaming of a world without weapons – Mairead Maguire in Sarajevo

What follows is the speech given by my friend and mentor, Mairead Maguire, on June 6th 2014 in Sarajevo, at a peace event marking the one hundredth anniversary of the assassination of  Archduke Ferdinand of Austria – the event that triggered the bloodbath of the First World War.

Mairead speaks prophetically and, as always, her words come straight from the heart! Whether she is right in suggesting that a strengthening of the United Nations is the way forward, I don’t know (I suspect the decentralising of power may be preferable). What I am sure about is that we will never achieve real world peace without inspiring visionaries like Mairead to lead us.

Mairead’s vision of a world without weapons and militarism might seem like no more than a dream. Even so, I am reminded of the words of the great Dom Helder Camara, “when one man dreams it is just a dream but when we all dream together it is the beginning of a new reality.” 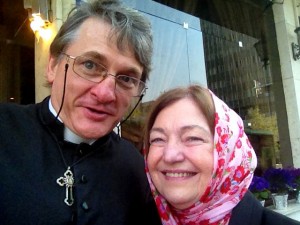 with Mairead Maguire in Tehran, April 2014

We are all aware that this is the 100th anniversary of the assassination of Archduke Ferdinand in Sarajevo which led to the start of the First World War in l9l4.

What started here in Sarajevo was a century of two global wars, a Cold War, a century of immense, rapid explosion of death and destruction technology, all extremely costly, and extremely risky.

A huge step in the history of war, but also a decisive turning point in the history of peace. The peace movement has never been as strong politically as in the last three decades before the break-out of WWl. It was a factor in political life, literature, organization, and planning, the Hague Peace Conferences, the Hague Peace Palace and the International Court of Arbitration, the bestseller of Bertha von Suttner, ‘Lay Down your Arms’. The optimism was high as to what this ‘new science’ of peace could mean to humankind. Parliaments, Kings, and Emperors, great cultural and business personalities involved themselves. The great strength of the Movement was that it did not limit itself to civilizing and slowing down militarism, it demanded its total abolition.

People were presented with an alternative, and they saw common interest in this alternative road forward for humankind.   What happened in Sarajevo a hundred years ago was a devastating blow to these ideas, and we never really recovered.   Now, 100 years later, must be the time for a thorough reappraisal of what we had with this vision of disarmament, and what we have done without it, and the need for a recommitment, and a new ambitious start offering new hope to a humanity suffering under the scourge of militarism and wars.

People are tired of armaments and war. They have seen that they release uncontrollable forces of tribalism and nationalism. These are dangerous and murderous forms of identity and above which we need to take steps to transcend, lest we unleash further dreadful violence upon the world.   To do this, we need to acknowledge that our common humanity and human dignity is more important than our different traditions. We need to recognize our life and the lives of others are sacred and we can solve our problems without killing each other.   We need to accept and celebrate diversity and otherness. We need to work to heal the ‘old’ divisions and misunderstandings, give and accept forgiveness, and choose nonkilling and nonviolence as ways to solve our problems. So too as we disarm our hearts and minds, we can also disarm our countries and our world.

We are also challenged to build structures through which we can co-operate and which reflect our interconnected and interdependent relationships. The vision of the European Union founders to link countries together, economically in order to lessen the likelihood of war amongst the nations, is a worthy endeavour. Unfortunately instead of putting more energy into providing help for EU citizens, we are witnessing the growing Militarization of Europe, its role as a driving force for armaments, and its dangerous path, under the leadership of the USA/NATO, towards a new ‘cold’ war and military aggression. The European Union and many of its countries, who used to take initiatives in the UN for peaceful settlements of conflicts, particularly allegedly peaceful countries, like Norway and Sweden, are now one of the US/NATO most important war assets. The EU is a threat to the survival of neutrality. Many nations have been drawn into being complicit in breaking international law through US/UK/NATO wars in Afghanistan, Iraq, Libya, etc.,

I believe NATO should be abolished. The United Nations should be reformed and strengthened and we should get rid of the veto in the Security Council so that it is a fair vote and we don’t have one power ruling over us. The UN should actively take up its mandate to save the world from the scourge of war.

But there is hope. People are mobilizing and resisting non-violently. They are saying no to militarism and war and insisting on disarmament. Those of us in the Peace Movement can take inspiration from many who have gone before and worked to prevent war insisting on disarmament and peace. Such a person was Bertha Von Suttner, who was the first woman to win the Nobel Peace Prize in l905, for her activism in the Women’s rights and peace movement. She died in June, l9l4, 100 years ago, just before WWl started.   It was Bertha Von Suttner who moved Alfred Nobel to set up the Nobel Peace Prize Award and it was the ideas of the peace movement of the period that Alfred Nobel decided to support in his testament for the Champions of Peace, those who struggled for disarmament and replacing power with law and International relations. That this was the purpose is clearly confirmed by three expressions in the will, creating the fraternity of nations, work for abolition of armies, holding Peace Congresses. It is important the Nobel Committee be faithful to his wishes and that prizes go to the true Champions of Peace that Nobel had in mind.

This 100 year old Programme for Disarmament challenges those of us in the Peace Movement to confront militarism in a fundamental way. We must not be satisfied with improvements and reforms, but rather offer an alternative to militarism,

which is an aberration and a system of dysfunction, going completely against the true spirit of men and women, which is to love and be loved and solve our problems through co-operation, dialogue, nonviolence, and conflict resolution.

Thanks to the organizers for bringing us together.   In the coming days we shall feel the warmth and strength of being among thousands of friends and enriched by the variety of peace people, and ideas. We shall be inspired and energized to pursue our different projects, be it arms trade, nuclear, nonviolence, culture of peace, drone warfare, etc., Together we can lift the world!   But soon we shall be back home, on our own, and we know all too well how we all too often are being met with either indifference or a remote stare.   Our problem is not that people do not like what we say, what they understand correctly is that they believe little can be done, as the world is so highly militarized. There is an answer to this problem,- we want a different world and people to believe that peace and disarmament is possible. Can we agree, that diverse as our work is, a common vision of a world without arms, militarism and war, is indispensable for success. Does not our experience confirm that we will never achieve real change if we do not confront and reject militarism entirely, as the aberration/dysfunction it is in human history? Can we agree to work that all countries come together in an Agreement to abolish all weapons and war and to commit to always sort out our differences through International Law and Institutions?

Let the Sarajevo where peace ended, be the starting point for the bold beginning of a universal call for peace through the wholesale abolition of militarism.