A critique of American Human Rights

My thanks to Dr Yahya Jahangiri for the kind invitation to speak at this conference, organised by Tehran University in Iran.  I participated  via  the live  stream  on  June  30,  2021 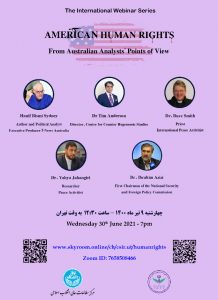 It is a privilege to be invited to speak to you today, and I am always conscious when I engage with my Iranian friends that our countries share the dubious privilege of both having experienced US-initiated regime change in the last generation or so.

Whitlam was formally dismissed by the Australian Governor General on constitutional grounds, but many believe that the Governor General was acting on the instructions of the CIA, and that it was Whitlam’s promise to evict US military bases from the country, along with his opposition to the Vietnam War, that was the real basis for his eviction from office.

We share this common heritage then of having both threatened US global hegemony, and having both paid the price for our presumption of independence. The key difference is that Iran took back its independence in 1979 whereas Australia continues to be a vassal to US interests. The other difference, of course, is that whereas the CIA acted openly in the overthrow of Mosaddegh, in all subsequent regime-change operations, the United States government and their agents have worked in the shadows.

The US regime-change operation that I am actually most familiar with is the current ten year long attempt to overthrow the democratically-elected government of Syria – an operation that most of us only became aware of in 2011, but which Wikileaks cables have revealed was already an explicit part of US foreign policy as early as 2006. I don’t pretend to have any particular expertise in understanding the political and economic factors that helped form that policy. What I am familiar with though is the level of devastation that it has caused. I have had the privilege of travelling to Syria nine times over the last ten years of war in that country and I have seen first-hand the toll that the US regime-change policy has taken on ordinary Syrian people.

I remember when I first arrived in Damascus, early in 2013, when things were at their worst, one of the first Syrian people I met was a woman, dressed in black, tugging on my cassock and trying to show me a photo of a young boy while she pleaded in broken English, “They killed my son, Mohamad! They put a bomb in his pocket and they blew him up! They killed him because we are Shia.”

It soon became apparent that the woman wanted me to help her get her other son out of Homs – something that I had no power to help her with whatsoever. Even so, I wondered then as I wonder now, whether those who sat in comfortable offices in Washington, working on their mission objectives in Syria, had any idea what life looked like on the receiving end of their policy decisions.

Of course, the connection between terrorist groups operating in Syria and their foreign backers has never been openly admitted. They have operated in the shadows. Even so, there is one weapon of foreign policy that the United States government has wielded openly, and it is, I believe, the most damaging weapon of all in terms of the toll it has taken on ordinary Syrian people, and I am talking, of course, about the sanctions.

Last time I was in Syria, in 2019, I met a lovely woman who worked with young people who had cancer. She said that all she could really do was to sit with these children as they died as they weren’t able to get them cancer medications. They were only ever able to get expired medications from developing countries. Why? Because of the sanctions.

The great irony of these devastating sanctions is that they have been sold to the American people as a humanitarian policy! The sanctions are part of the “Caesar Syria Civilian Protection Act”, named after an individual known as ‘Caesar’ who produced photographs that were allegedly taken of people who had been tortured by the Syrian government, though how these sanctions could ever have been envisaged as a form of ‘civilian protection’ is beyond comprehension.

The photographs of ‘Caesar’ are themselves highly suspect, which only adds to the irony. Of course, the sanctions themselves do make provision for food and medications to be delivered to Syria, as these are technically exempt, but those who design the sanctions know full well that such exempted items will never reach Syria, as the exporting companies cannot take the risk.

The fines imposed on companies that export prohibited goods to sanctioned countries are so great that they can bankrupt an offending company overnight. No board of directors in their right mind will ever block the export of their widgets, but allow the export of food and medicine lest a widget be accidentally included, or lest a competitor allege that they exported a widget, tying them up in court for years.

Those who design these sanctions know how companies operate, and they know that their ‘humanitarian sanctions’ will result in death and devastation for ordinary people. This particular irony mirrors the greater lie proclaimed by successive US administrations, that they are only intervening in the affairs of other countries, such as Syria, out of a concern for the human rights of their people.

This brings us back to the broader issue of why the United States feels it has a unique role to play as global policeman – enforcing democracy and human rights on the rest of the world. We would argue, of course, that this has never been the true intention of US foreign policy but, even so, we must also ask why the United States of America should ever have felt that it had this unique responsibility in world affairs.

There has indeed been a history of rhetoric from US leaders, explicating the unique role they see their country as having in the world. The idea that North America was formed as “A city built on a hill” goes right back to one of the founding fathers – John Winthrop – who took this image from Jesus’ Sermon on the Mount (Gospel of Matthew, chapters 5 to 7) to depict his new colony in Massachusetts Bay as a model of Christian charity. The phrase was taken up again in writings such as Manly Hall’s “The Secret Destiny of America” (1944) and used unashamedly in speeches by Ronald Reagan and Barak Obama, amongst other American political luminaries.

At one level, this is simply the common language of empire. Julius Caesar would speak of his aim to ‘civilize the Gaul’s’ before engaging in the wanton slaughter of their native people. Rudyard Kipling similarly spoke of the ‘white man’s burden’ to justify the imperialist ambitions of the British Empire. Empires inevitably produce high-sounding propaganda to mask their greed. Even Adolf Hitler framed his bloodlust as an attempt to save the world from his imagined Jewish enemy! What makes the American propaganda especially difficult for me to deal with though, of course, is the way it is so often steeped in the language of the New Testament.

It has been suggested that a perverse strain of Evangelical Christianity has fueled much of the violence of American imperialism. The New Testament does indeed depict the suffering and death of Jesus as a means to the salvation of the world, and this combination of suffering and salvation has given rise to what American theologian, Walter Wink, termed, ‘the myth of redemptive violence’ wherein positive social change is seen as inevitably requiring a degree of violence and suffering.

This is well illustrated in Julia Ward Howe’s great Battle Hymn of the Republic (1862), wherein the struggle for emancipation of African Americans in the American Civil War (1861-1864) is depicted as a holy war, foreshadowed by the cross of Christ – “As He died to make men holy, let us die to make men free”.

I believe that political leaders will always try to tap into the religious idealism of their people in order to further their own political ends. Conversely though, I believe that genuine religious piety, that begins in the prayers of the people, will inevitably be critical of power, and will always choose the path of peace.

When we look back over the last 100 years, we can see a handful of positive examples of movements for social change where the genuine religious piety was a driving force.

In each of these cases we see, not politicians using religious rhetoric, but religion inspiring political change. Each of these social movements were as peaceful as they were powerful, and their results have been long-lasting. The contrast between these religiously-driven movements for social change and the hollow crusades of successive US administrations, thinly veiled with a veneer of human-rights rhetoric and Biblical imagery, could not be more stark.

As we look at our sisters and brothers in the United States at the moment, we see a country in turmoil, an empire in decline, and a culture where the place of religion is very much in question. The rhetoric of American exceptionalism sounds increasingly hollow as all pretentions to moral superiority are gradually being seen to be without foundation.

My hope and prayer for our brothers and sisters in the United States is that the genuine religious piety of so many people in that land will lead to a peaceful revolution through which their leaders will be held accountable for their human-rights abuses and where, ultimately, we may yet see America become that city built on a hill that she always had the potential to be.